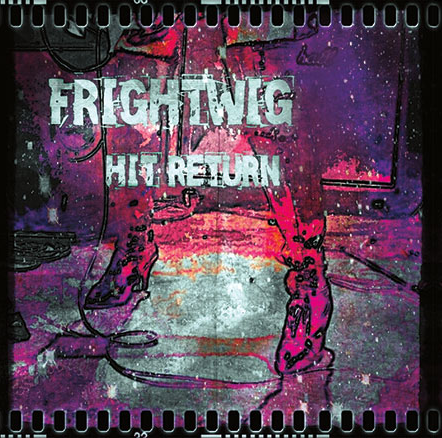 FRIGHTWIG! If they ever play within 500 miles of where you live, quit your job, give the kids to Grandma for the weekend, sell your collection of rare vinyl, whatever it takes and GO SEE THIS BAND. You will thank me later, and even your kids will understand why you had to do this. Four different primary singer songwriters, and with each song your favorite will change.

Way back in 1982, Mia d’Bruzzi and Deanna Mitchell started writing and playing together. By 1983, FRIGHTWIG was unleashed on an ill-prepared public. They performed at such legendary San Francisco clubs as The Farm, Mabuhay Gardens, The On Broadway, The Sound of Music and The Fillmore amongst others. A lot of good music came from San Francisco during that era. Frightwig made some of the very best. They toured the United States frequently, and were also popular in Europe. Talent, songwriting, beauty and hard work occasionally pay off. They were big, but they should have been huge.

The 1980’s were a wild and reckless time for a lot of us. Those times take some casualties. There were a couple changes in membership of the band. Various members took “time off” for the usual reasons- Love, career, children, and life outside of a crowded van took over for awhile.

This is Frightwig today: Mia d’Bruzzi, guitar and vocals; Deanna Mitchell, bass and vocals: Cecilia Kuhn, drums and vocals; Rebecca Sevrin, guitar and vocals…oh yeah, and the legendary Eric Drew Feldman (has recorded, performed, produced and toured with Captain Beefheart, Snakefinger, Frank Black, Pere Ubu, PJ Harvey and Knife & Fork amongst others) on keyboards as well. FRIGHTWIG is now. Their recent performances are again thrilling audiences. I am a hardened aging punk rocker and criminal defense lawyer and they bring me to tears. Really. They really love each other, and they love you too.

Come taste the ‘Wig. On this EP you will hear songs written and sung by each of the four singing band members. These are songs about death, sex, love, men, meaning, and this Crazy Crazy World we Live In. You are going to hear mind, heart, beauty and soul. You will hear something new each time you play these tunes.
And, like me, you will come to spread the gospel of FRIGHTWIG.