“California Über Alles,” Jello Biafra and the Dead Kennedys sang during the Golden Age of Punk. Across the Atlantic, The Sex Pistols screamed, “I am an anarchist.” At its best, Punk in the U.S. and in England expressed anti-racist and anti-authoritarian sentiments. Bands like the Ramones—who sang songs like “I Wanna Be Sedated” and “The KKK Took My Baby Away”—revived rock ‘n’ roll when rock needed reviving in the age of Thatcher/Reagan. Macho guys enjoyed successful careers, but the music industry often turned a deaf ear to the women singers and musicians. Sometimes male audiences weren’t much better. 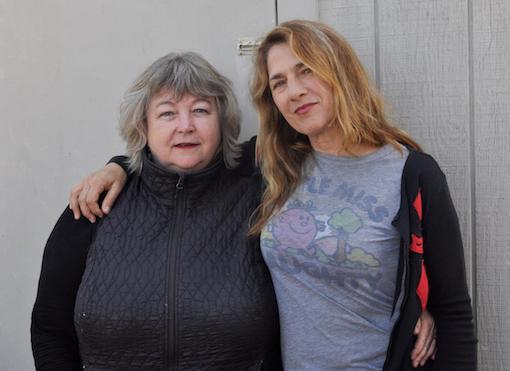 Frightwig, a San Francisco based all-women’s band, had to fight for time and space in a male dominated culture. With grit and determination, it carved out its own territory and made a name for itself. Then the group disbanded so the two mainstays could have kids and raise families. Now, just in time for the terrors of the Donald Trump/Theresa May era, the band is back and raring to take on the powers-that-be once again. I caught up with them recently and listened to them talk about their lives on the road, music and politics and the comeback plans.

In the 1980s—when punk began to flower in San Francisco—Deanna Mitchell and Mia Simmans—Frightwig’s founders— never wore fishnet stockings, stilettos or had panda-like eyes and spiky hair, though the name of the band suggests unkempt hair that stands straight up. Frightwig never fit the stereotype of the female punk band. Maybe there never was such a thing.

Still, Frightwig lived punk as thoroughly as any of the guy bands that grabbed headlines in Rolling Stone magazine. Deanna was 24 when she and Mia first shook up the clubs where guys leered and geared. Mia was 18 and learning how to defender herself when she was hassled. Deanna’s last name was Ashley. Mia’s was Levin. That was in San Francisco before the HIV/AIDs pandemic wasted whole communities.

“It was a wild time and a horrible time,” Deanna said. “We lost a whole community of beautiful young men, mostly, and we had to learn very quickly how to deal with death.”

Over the years, Frightwig has played with several women drummers who came and went. Cecilia Kuhn, who recently died of cancer, was the heart and soul of drums and vocals. “Yeah, we lost Cecilia physically,” Deanna said. “But we’re still here.” Mia added, “We go very deep. We used to joke that we should marry one another, but we found good men, married them and raised families. And here we are, together again.”

Mia and Deanna toured the country and cut a few records, opening for Butthole Surfers, Redd Kross, DOA and many other bands. They performed in New York, L.A., Chicago, New Orleans and all across America, as well as in Canada and Europe. In the 1980s Mia and Deanna had jobs at movie theaters like the Strand and the Egyptian that paid $3.25 an hour.

“We did what we wanted to do,” Mia said. “We paid the rent, lived on burritos, went to Rainbow, picked up vegetables that were too ripe to sell and at home made soup.”

Deanna added, “A lot of the San Francisco punk bands didn’t want to go on the road. But we’d always said, ‘Get us outta here.’ We’d pile into a car, drive to New York and do our gigs. There were places where we had the support of male bands.”

On stage at The Fillmore, Tool & Die and Mabuhay Gardens, they played mean guitars, belted out their lyrics and couldn’t help but look sexy and sound like they belonged to the world of street protest.

“I can’t write a happy-go-lucky song,” Deanna said. “They

have to be political.” Mia explained, “Writing lyrics is my favorite thing in the world to do. I’m compelled to write. All the words belong to me.”

Deanna says. They’re youthful crones who are outraged by the growing gulf between the haves and the have-nots and shocked by the mushrooming detention centers along the U.S./Mexico border. They can’t not stay at home and not perform songs such as “Redistribution of Wealth.”

In fact, Frightwig is back by popular demand, as sassy as ever, and ready to take on the culture of misogyny all over again. “Smash the patriarchy is my hashtag,” Deanna said. “We need a woman in the White House to clean up the mess that men have made all over the planet.” She added, “I tell Trump to ‘Fuck off’ on his Twitter account and he can’t do anything to stop me.”

Deanna and Mia both remember that guys in the audience would look up at them on stage and shout, “Show us your tits.” They’d shout back, “Get up here and strip for us.”

Mia explained, “We weren’t into being offended. We didn’t want to play the victim.”

In some ways, Deanna and Mia were unlikely band mates. Deanna was born in Bakersfield and grew up in Fremont, California, where her mother raised her on country music, which she still loves. Mia grew up in New Jersey, Washington, D.C. and Palo Alto, California. Her hippie mom gave her a musical education in Joan Baez and the Beatles. At 16, Mia moved to San Francisco on her own steam. Despite the cultural differences between them, both women have a keen sense of humor. They also both like to dress up and give the audience something to look at. 37-years after they first came together they still dress up and give audiences something to look at.

On Mother’s Day, May 12, the newly recreated Frightwig performs at Oasis, the legendary gay nightclub that features cabaret and drag shows. It’s a benefit for RAICES, a Texas non-profit that helps asylum seekers. “The audience will be very appreciative and also very demanding,” Deanna said.

The venue, the cause, and the Mother’s Day occasion promises to bring out the best Frightwig has to offer.