Frightwig is touring the East coast in September with Jane Lee Hooker!

Haven’t heard of Frightwig? Here is their Herstory:

Birthed in 1982 by Deanna Mitchell and Mia d’Bruzzi, Frightwig invented the template for the Riot-grrl phenomenon that followed over a decade later. Funny, funky and furious, Frightwig produced the full-length albums Cat Farm Faboo (Subterranean Records 1984) and Faster Frightwig Kill Kill (Caroline Records 1986), as well as the EP Phone Sexy (Boner Records 1988). The first two LPs were re-released as the double album Wild Women Never Die… (Southern Records 1994).
Frightwig has widely been credited as one of the most original, intense and fearless feminist bands by musicians, critics and fans alike.

After taking a hiatus from live performance, Frightwig has now returned with a vengeance to the center stage. Presenting an all-star line-up which features founding members Deanna Mitchell (the Mouthiest Woman Alive) on bass, “they broke the mold” Mia d’Bruzzi on guitar and secret weapon “Saint” Cecilia Kuhn on drums. Frightwig has taken a man into the fold, this is the legendary Eric Drew Feldman who has recorded, performed, produced and toured with Captain Beefheart, Snakefinger, Frank Black, Pere Ubu, PJ Harvey and Knife & Fork amongst others. Frightwig has never sounded better.

Check out Frightwig’s new video “War On Women” on YouTube, released July 2014. Which will be available as a self-released vinyl 7” along with the new song “Hear What I Say,” and will be distributed by MRI Entertainment on 9/16/2014 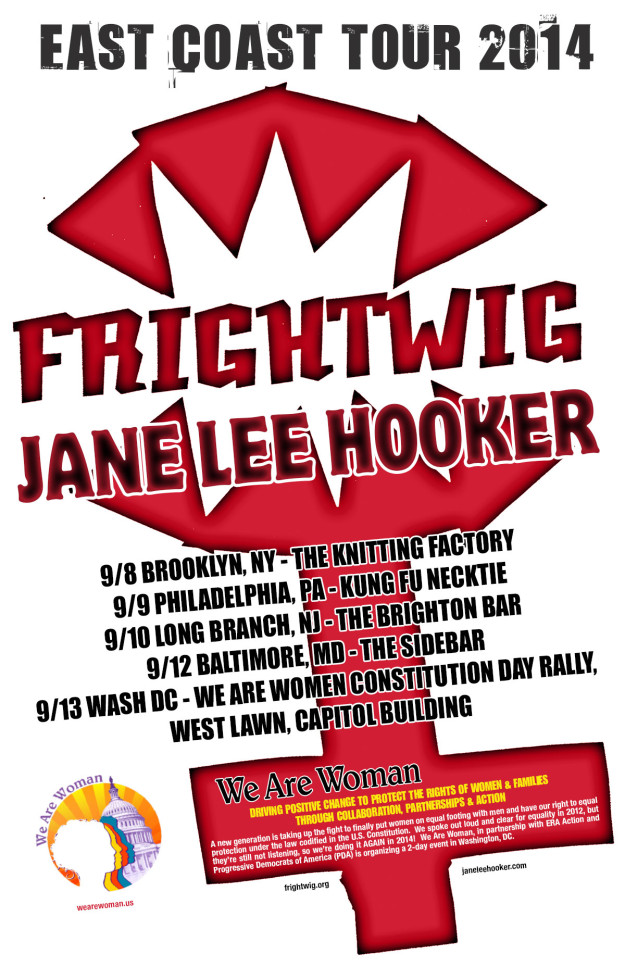 ‹ SF Show at The Eagle on September 4th!

Frightwig Are Pleased To Announce Distribution Deal with MRI Entertainment ›