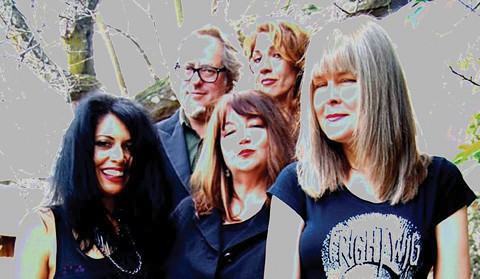 When she formed Frightwig three decades ago, Deanna Mitchell had no idea how crucial her all-girl garage-punk combo would become. But with two great albums —“Cat Farm Faboo” in 1982 and “Faster, Frightwig, Kill! Kill!” in 1983 — the band blazed a trail for female musicians and helped launch the riot grrrl movement. By 1994, after countless lineup changes (including a stint by Paula Frazer, of Tarnation renown), Mitchell and co-founders Mia d’Bruzzi and Cecelia Kuhn were so sick of touring they called it quits. Now Mitchell, who works part time for the San Francisco Department of Elections, feels it’s time for a Frightwig renaissance, which kicks off with a new EP, “Hit Return” (produced by latest member Eric Drew Feldman), and an upcoming album for Southern Records, which already reissued “Cat” and “Faster” as the two-disc “Wild Women Never Die.”

Looking back, can you sense the Frightwig legacy now? Well, we had L7 come to San Francisco for their very first show, to play our second record-release party. So what we did — and I know it now — is, we made it OK for those girls in all those bands. They saw us play and I think they probably felt like, “Wow! It’s OK, we can do this, too!” But it’s been interesting, sitting back and watching the rise of the girls, like Courtney Love. I feel like we set some bricks down in the past, so I’ve enjoyed seeing the women come up in the music business.

What’s your new single, “Crawford,” about? Well, technically, it’s not new. Mia and I wrote that back in ’82. There was this girl back then named Crawford who played in this band G.O.D., Girls On Drugs, and she used to get wasted on alcohol, drugs, whatever — I’m not sure. But she would be passed out at parties. And we were at this party one night, and she was passed out, and nobody really thought anything about it. But she was dead. So Mia and I wrote that song, but it was so depressing we just put it away.

How has the music business changed since you left? Record labels aren’t paying for people to record unless it’s somebody big, and there are a thousand times more bands now. So the only leg we have up is our history. I’ve spent this past year asking questions of people I respect — people in bands, people at labels. And I’m pretty realistic — there’s a set group of people who know of Frightwig, not a large audience. So we need to get our name out there, become more visible, and grow an audience all over again.